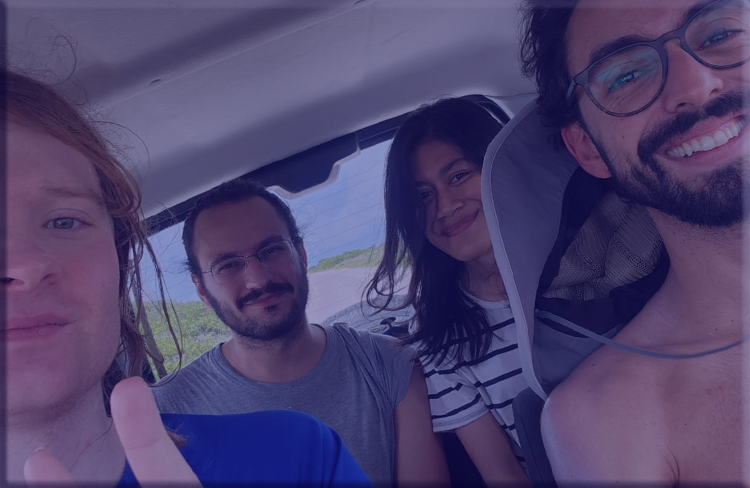 The morning downpour has finally stopped. Now, sitting on this balcony, gazing out across the thick verdant vegetation of this tropical island, there’s a moment of quiet peace amongst the returning birdsong to reflect on how we ended up in this situation. For, this trip is part of the Joint Multidisciplinary Research Project, itself a mandatory course within the Islands MSc. The JMRP is a groupwork course. It is designed to help our development as researchers through providing us a client and a research prompt. For our group we have been analysing the potential for “Community-Based Tourism” on the Dutch Caribbean island of Bonaire. In brief, Community-Based Tourism is an umbrella term for a tourism sector based on community operated enterprises and co-operative networks. Tourism in Bonaire, famed for its world class diving industry, is in the midst of a transitive moment. The contemporary sector wrestles with challenges such as overcrowding, coral degradation, and inequitable distribution of proceeds. Working in collaboration with the Ministry of Economic Affairs (RVO), this project is part of a wider effort to find sustainable solutions to these issues.

Thus, in September of this year the four of us devised a potential research plan aimed at finding policy recommendations needed for Community-Based Tourism to further develop in Bonaire. Following a meeting with the Ministry in Den Haag, we determined that, as per the grassroots ethos of Community-Based Tourism, qualitative research with the residents and stakeholders of Bonaire would be the most suitable methodology. Initially, this was proposed to be online via video calls. However, as the project progressed, it became more apparent to both us and the Ministry that on the ground research would likely yield far more insightful results. By mid-October, after a series of exchanges with the Ministry, we acquired funding to do just that and spend one week on the island, carrying out observational research and a host of in-depth interviews.

Returning to the present, we have been on Bonaire for around two and a half days now, having completed 5 in-depth interviews. This island has imprinted a powerful impression on us. It is stunningly beautiful. A silvery blue sea that glistens in the sunlight hugs its coastline, the warm waters full of colourful sea life and coral to greet any would-be swimmer or diver. The land is likewise teeming with biodiversity. On a short 20-minute walk to pick up our rental car we saw an uncountable array of birds and lizards, including a large iguana who, like the tourists surrounding it, was soaking in the morning sunrise on the beach. We were also blessed by numerous sightings of flamingos – their elegant bright pink frames crowding the island’s salt lakes. Flamingos are an important symbol of this island, with the only airport being named after them and their motifs dotting the streets and murals of the capital of Kralendijk. Regarding Kralendijk, itself a conglomeration of five former settlements, the city’s residents represent many different cultures from all over the world. One notable experience was Viola (an Indonesian member of the research team) speaking Javanese with a street food vendor from Suriname, a reminder that despite being on other sides of the world, islands such as Bonaire and Java are linked by an enduring legacy of colonialism.

For there is a nuanced complexity to everything on Bonaire. Unlike Aruba or Curaçao, it is a special municipality of the Netherlands, not a separate country within the Kingdom. Yet you must pay a $75 visitor entry tax upon arrival – they use US Dollars here, not Euros. Further, unlike much of the Netherlands, Bonaire is car dependent, lacking public transportation or a dedicated cycling network. However, the roads themselves are so poor quality in places that only a 4×4 can really travel along them (there was a large rain storm the day prior to our arrival, flooding much of the island’s infrastructure). Inflation and the cost of living here is much higher, with the price of a head of lettuce being $4 or a tub of yogurt $9. As living costs like this are coupled with a minimum wage of less than $7 an hour, economic inequality and poverty has manifested themselves in many corners of island life. From talking to people, there is frustration that many of the major industries on the island are owned by entities not based on Bonaire. The perception is that, despite Bonaire owning one-of-a-kind natural and cultural beauty to attract bountiful tourism, money is taken from the island, not recirculated into the community. Investment and support for Community-Based Tourism initiatives could help, in a small way, to alleviate this

Looking forward into the future, as we traverse along more of the island’s bumpy roads in our little Suzuki Jimmy, this project continues to develop in a dynamic manner. With each observation and insight we are beginning to formulate a clearer picture of the viability of community tourism, and the key challenges its successful implementation will face. Each interview is followed by intense discussion amongst us about the new information we have gathered and what questions we might want to add to our research guide to ask our future participants. By the end of this week, we will have largely completed data collection and will begin the lengthy analytical process of transcribing and coding our interview and observational data. From this we will start the write up of our final report and policy recommendations, as well as preparing presentations of our results for several events, such as a conference with students and young professionals from the Dutch Caribbean.

We use cookies on our website to give you the most relevant experience by remembering your preferences and repeat visits. By clicking “Accept All”, you consent to the use of ALL the cookies. However, you may visit "Cookie Settings" to provide a controlled consent.
Cookie SettingsAccept All
Manage consent

This website uses cookies to improve your experience while you navigate through the website. Out of these, the cookies that are categorized as necessary are stored on your browser as they are essential for the working of basic functionalities of the website. We also use third-party cookies that help us analyze and understand how you use this website. These cookies will be stored in your browser only with your consent. You also have the option to opt-out of these cookies. But opting out of some of these cookies may affect your browsing experience.
Necessary Always Enabled
Necessary cookies are absolutely essential for the website to function properly. These cookies ensure basic functionalities and security features of the website, anonymously.
Functional
Functional cookies help to perform certain functionalities like sharing the content of the website on social media platforms, collect feedbacks, and other third-party features.
Performance
Performance cookies are used to understand and analyze the key performance indexes of the website which helps in delivering a better user experience for the visitors.
Analytics
Analytical cookies are used to understand how visitors interact with the website. These cookies help provide information on metrics the number of visitors, bounce rate, traffic source, etc.
Others
Other uncategorized cookies are those that are being analyzed and have not been classified into a category as yet.
SAVE & ACCEPT